As with previous iterations of virtual conferences, subsidies could focus on coverage of conference registration and ACL membership fees. A positive consequence of the shift to a virtual conference format is the potential for participation by community members who would have been unable to travel to the physical conference location. To take advantage of this change, when soliciting applications for financial subsidies, the subcommittee encouraged applications from all interested community members regardless of whether the prospective attendee had an accepted paper in the conference. About 60% applicants did not have an accepted paper at the conference.

The application for the D&I subsidy went online on April 20, 2021, with a deadline on May 6, 2021. The form was publicized through Twitter in addition to a blog post on the official website. The D&I chairs also shared the form via social media, along with organizations such as Queer in AI, Black in AI, LatinX in AI, AfricaNLP, and Masakhane. The form was kept open until the conference date, however requests made after the early registration deadline were considered on an emergency case-by-case basis. In total, we received over 210 applications. Over 70% applicants said they would not have registered for NAACL without subsidy.

The subsidy forms were heavily advertised in AfricaNLP, Masakhane, Queer in AI, Black in AI and LatinX in AI lists. All AmericasNLP and Student Research Workshop (SRW) accepted authors were strongly encouraged to apply for subsidies and the subsidy form link was added in the acceptance emails. 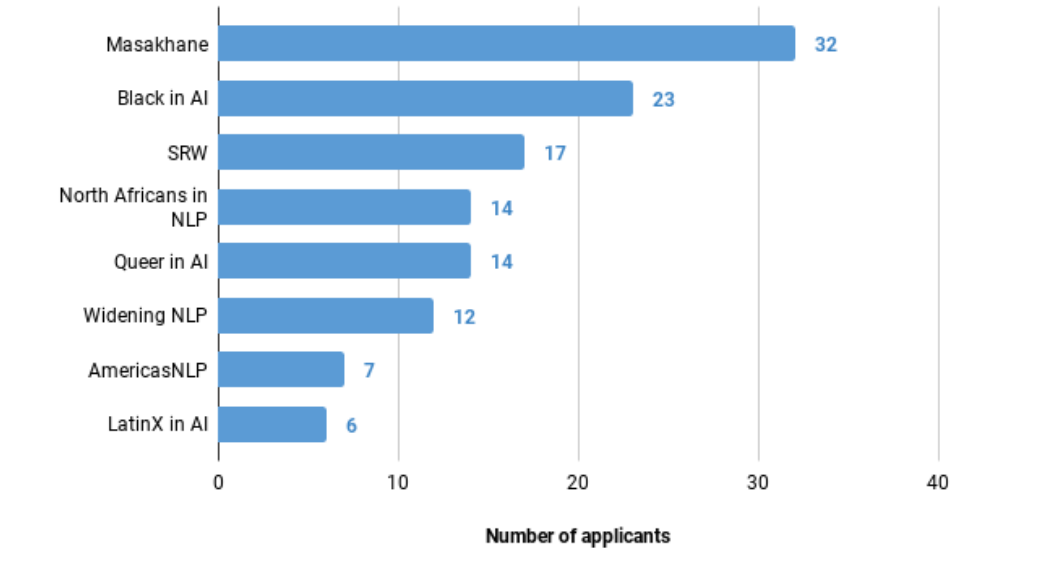 In selecting subsidy recipients, the subcommittee considered a number of factors – for example, whether the applicant was a student (57% graduate + 19% undergraduate students), was attending a *ACL conference for the first time (59% first-time attendees), came from an underrepresented geographical region (details mentioned above), or identified as a member of a minoritized group (details mentioned below).

The D&I awarded grants to 194 applicants, each receiving coverage for some combination of the conference registration fee and ACL membership fee (147), volunteership (33), and internet bandwidth/VPN/caregiving/disability support subsidy (14). The grants were given to almost all applicants who applied before the due date and had complete and correct information. We were selective for applicants who applied after the due date. Some of the awardees opted for volunteership, instead of D&I awards. In total, we awarded $13450 towards registration and membership fees, and offered another 14 accessibility + bandwidth + VPN grants $1100 (excluding fund-transfer fees) for subsidies. 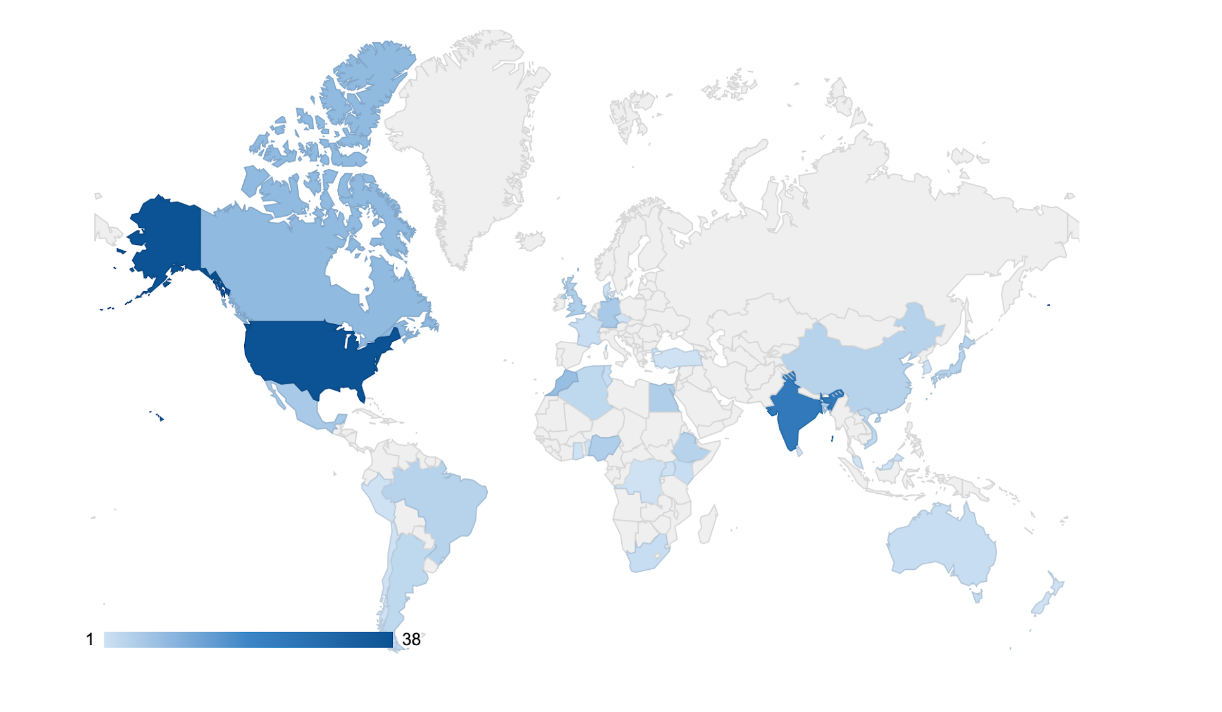 Why are people applying for subsidies?

We found some patterns among applicants as to the reasons why they were applying for the subsidies. Some of these are listed below:

How can we do better in the future?

We recommend future conferences to continue prioritizing outreach to researchers from underrepresented regions to better bridge the gaps and make our community more inclusive. We also recommend making sure that the forms are available across regions, and are well publicized.

We also asked various affinity groups on how this scheme can be better in future. We talked to Diana Galvan and Luciana Benotti, two of the core organizers of LatinX in AI. Luciana is also a NAACL executive board member. They recommended:

Latin Americans are a largely underrepresented community at NAACL, while NAACL chapter serves the whole continent. At NAACL 2021, 71 Latin Americans registered in comparison to over 1600 from the United States and Canada. As of March 2021, ACL has 2970 NAACL chapter members, 2922 are from the United States and Canada, while 48 members are from Latin America. In contrast, 64% of the people in the American continent live in Latin America. This underrepresentation happens in a context in which reduced fees and virtual format of the conferences made them more inclusive. And also the D&I Committee at NAACL 2021 strived to increase participation of underrepresented communities. As in person conferences start to come back, the few Latin Americans present today in NAACL will face higher economic barriers. In order to promote the participation of this community, as the NAACL constitution suggests, I have the following recommendations for future NAACL diversity and inclusion efforts.

First, registration should be drastically reduced or waived for people affiliated with a Latin American university. Second, the NAACL Regional Americas Fund should consider funding more proposals, and should strive to also support those it cannot fund by promoting them in a transparent way. Third, there should be regular and dedicated funding for sponsoring in person conference attendance. Finally, remote participation at conferences should always be an option. Funding could come from the D&I sponsors.

The challenges that Latin American countries must face are often overlooked. Montoya and Rivas (2019) report salaries for engineers and researchers in the United States that go from $100K and up while in Latin America they start from $10K a year. Also unemployment rates are higher than 40% in some Latin American countries . Moreover, research funds have been cut in recent years. Finally, deaths for Covid in Latin America are more than one million in May 2021, that is more than 3 times the amount in India with half the population. In order to make NAACL really diverse, it is imperative to bear in mind the unequal conditions that political instability, economic collapse and health inequalities create for Latin American researchers.

Pranav A, Luca Soldaini and Sabine Weber, the core organizers from Queer in AI recommended:

LGBTQIA+ individuals are marginalized in many research fields due to, among other things, economic hardship and ostracization due to homophobia and transphobia; in particular, individuals who reside in countries with laws that severely undermine the rights of queer people face extreme hardship. Therefore, the *CL community should strive in implementing measures that not only allow current LGBTQ researchers to attend, but also open our conferences to queer individuals who might be interested in NLP research, but otherwise have no opportunity to get involved due to lack of support.

First, we recommend future D&I chairs to significantly ramp up advertising of D&I grants, both in terms of expanding advertising efforts and opening up applications months, rather than weeks, in advance. Ideally, D&I funding should be awarded at paper submission time, so that queer and other margizalized researchers can plan their submissions knowing that they would be able to attend the conference if their work is accepted.

Second, conference organizers should strive to make their event as queer-friendly as possible. Queer in AI recently released a guide on how to make virtual conferences as accessible for LGBTQIA+ individuals as possible; equal care should be placed in organizing physical and hybrid conferences once those are an option again.

Hady Elshar, one of the core organizers from Masakhane recommended:

There should be full support for event organizers and speakers. The other idea could be establishing an online process to allow donations and facilitate sponsorship: a very easy way to support people is to allow transferable tickets (through discount coupons maybe) . This allows somebody to buy for e.g. 10 tickets of *CL conference, get an immediate receipt (for tax returns) and send them as a gift to students or workshop organizers. The current system doesn’t allow donations and for sponsorship it is an invoice based which has an extremely long overload on event organizers.

The NAACL 2021 D&I committee thanks the Diversity and Inclusion: Champion sponsors, Google Research and Microsoft, that enabled us to provide financial subsidies. In the future, as the world adjusts again to the new normal, we recommend maintaining as well as increasing the accessibility considerations that have come to light during the COVID-19 pandemic.